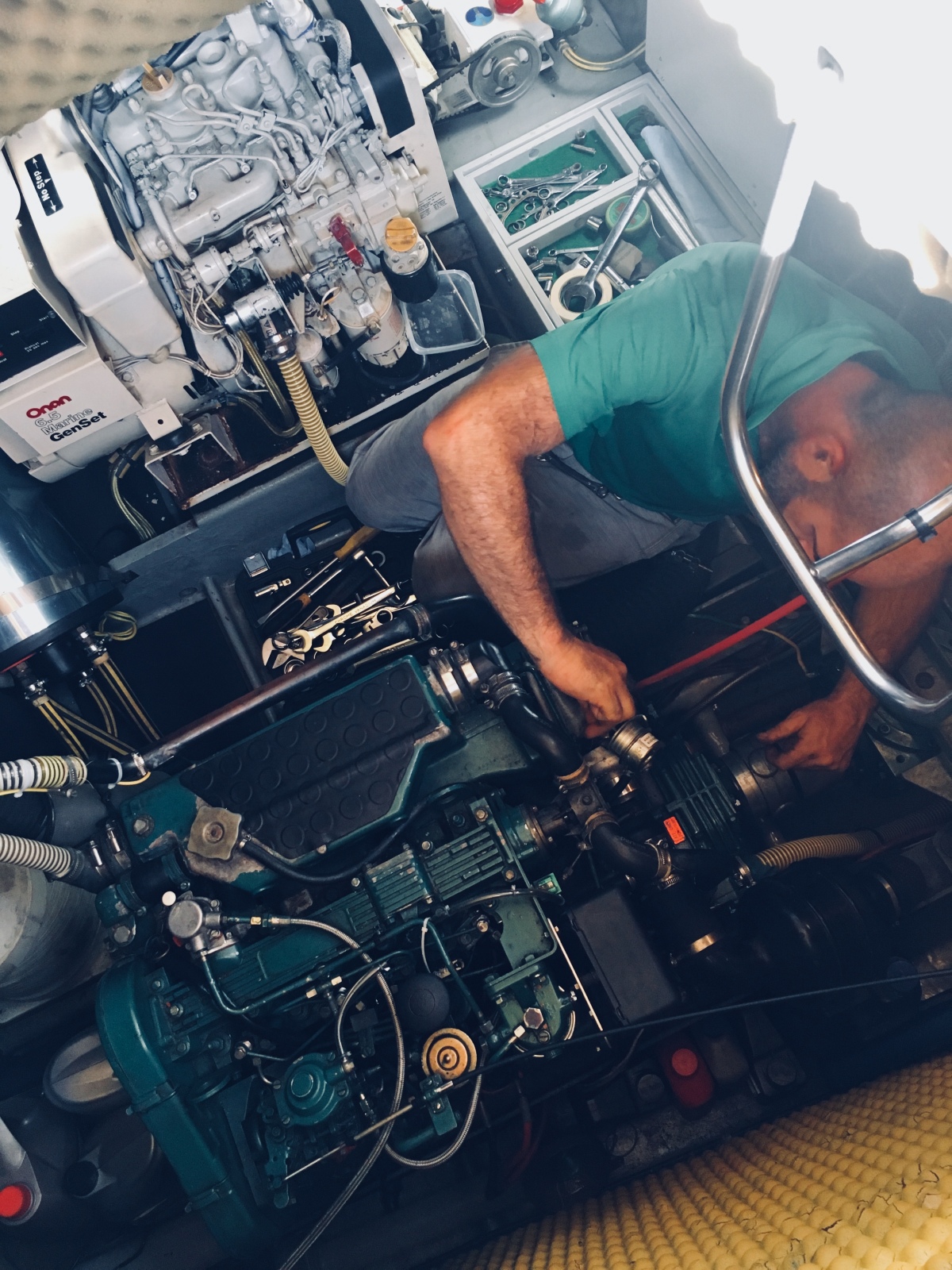 A lovely visit to Asturias to visit friends. All the boat work almost done, but still ‘stuck’ in Valencia.

While we thought we would have left by now we are still in the marina in Valencia. We missed a very good weather window last week. Unfortunately David got a sudden dental issue which he needed to fly back twice to the UK for. A bummer but Valencia is not a bad place to spend some time.

With being most of the boat work done I thought I give you all a little update of what exactly has been done. So, it is going to be a bit of a technical nerdy blog this one.
Before we arrived we made a list of the things we wanted to upgrade or change. The list was manageable and we thought it would take us around 3 weeks. But the thing is, you start a job but then another job appears to be solved first. Meaning the list kept on growing.

One of the major jobs was the engine which has taken a long time. The turbo wasn’t working anymore and we were only making a maximum of 1800 revs. This can be caused by a numerous amount of reasons, which need to be eliminate one by one. And hopefully the first one is the right pick. We took the injectors out and brought them to a garage where they checked them. Back in, but still no good. We changed the fuel injection pump, cleaned out all the pipes, tweaked other bits and David even got into the water to clean the propellor. But that rev counter was still not going up. In the meantime we learned a lot about our engine and in a way it felt good to spend so much time on it. After many hours; in the end; we changed the turbo for a whole new one, which brought us back to 2450 revs again. I can hear you thinking; Turbo problem, why not change it straight away? Well, a new turbo cost significantly more than the other maybe possible caused reasons if you can imagine. With all the effort David has put in it feels like we have a new engine! He even gave it a paint job!

We have done a lot of work which was not necessarily needed, I talk here about cosmetic work. We ended up changing our windows in the cockpit. We saw this change on the boat of our lovely friends from SV Nathape who are in Valencia too. Our windows were scratched all over the place so we decided to change them as well. We took the old ones out and drove for two hours to a place where they only deal with plexiglass. They took the old ones to make the new ones exactly the same. After 3 hours we were able to pick them up. Great service and by the end of the day we had some new windows. They needed some painting around the edges but after that they were ready to go in. We are very happy that we have done this job. Mostly because when we sail in the night we couldnt see very well through the old windows.

I love cooking and we both spend a lot of time in the galley. With only 2.75 x 2 gas cilinders on board we found out that we run out of them very quickly. And it is really a ‘pain’ (even) in the Mediterranean to find a refill sometimes. We decided to make a bigger gas locker compartment in order to fit two times 10 gas cylinders. A big job David did, which meant designing, fibreglassing and epoxying the whole thing. It’s looking great so far and David is finishing off this job as we speak. It will take a long time before we need a refill again. Happy Kelly! But there was more fibreglassing going on, not only made David a new gas locker he also made a new bow locker floor in one of our big lockers at the bow of the boat. So much work went into these two jobs.

But with all that work it was time for some days off. We rented a car and we drove up to Asturias in the North of Spain, an 8 hour trip, where we were seeing our friends. Asturias is well known for its green landscapes, serious gastronomy, great beaches and colorful fishing villages. It is beautiful, even in the rain, which happend to be there all the time while we were around. It was a lovely weekend, filled with fantastic food, happy laughs from Mia their daughter and good company. We both completely relaxed.

But back to work again and something we wanted to do for a while was getting the swimming ladder and the last bits of our davids off. The holes still needs some sorting out but we are very happy with this result.

Our furler motor from our genoa needed some attention too. On the motor is a disk that links the gearbox to the furler profile. The three bolts in that disk where basically gone and not good. This needed replacement. It was something that had to be done by a garage because we don’t have these kind of tools to do this on board. So David spent a lot of trips backwards and forwards towards these great guys who sorted it all. A new thick disk with big strong bolts, new bearings and new grease with grease nipples.

Something visual which was high on my list was a new logo. Over the years the Amel logo has been completely faded by the sun. It’s obviously not important to cross an ocean but it makes me pretty happy this outcome.

Our Bimini is getting a bit old and actually maybe needs replacement. But with some hand sewing it still keeps together. We were thinking about a completely new one but in the end decided against it. We can do with this one just a bit longer. After some patches that I have been stitching up I stitch on 12 round patches of strong plastic. This, so we can attach our new flexible solar panels on top of the Bimini. Quite a job when you are doing the stitching by hand. The two new flexible solar panels are together worth 340 watts. Our existing solar panel system has three panels. Two are above our Bimini and one is attached on the railing on the side of the boat. Each worth a 100 watts. Back in the day when we bought our solar panels we couldn’t find the right size with the maximum output. But looking online again a year later we did. So we decided to change the ones above the Bimini. From a 100 watts each, to 160 watts. A good upgrade overall, with in total 460 more watts compare to what we had before.

And then all the other many little jobs not even mentioned. Changing a lot of lines, meaning whipping them all. Our yearly winch maintenance. We have cleared out EVERY locker and cupboard on board and throwing away what can go and rearranged it all. Our cupboards were always full of stuff and now we have put everything in boxes so it is very clear where what is. We sorted out the sun cover for our sails, which means getting all the sails down and back on again. We put new seals on the bow thruster and depth sounder and lots and lots more little jobs. The list was endless but we are almost there!

As we speak David is upgrading our existing navigation system. Last week we decided to buy an autopilot ‘on the wind’. At the moment we have an autopilot that you can set on a certain degree. Works perfectly fine, but we love to follow the wind and we have been discussing this option a lot in the last year. So, we gave ourselves a big Christmas present! That doesn’t mean we loose our old system, we just have two systems now.

But Kelly, when are you guys leaving? I can tell you, we are both dying to get out there but the wind is predominately against us. Maybe we have made a wrong decision by doing the work here, too far away from Gibraltar. But we thought we would only have three weeks worth of work. Anyway, as soon as we can, we set sail.

We hope we spent Christmas at sea. I am looking forward to that because it feels like home.

We hope you all have a fantastic upcoming Christmas and New Years! Big love from Ker Marie!